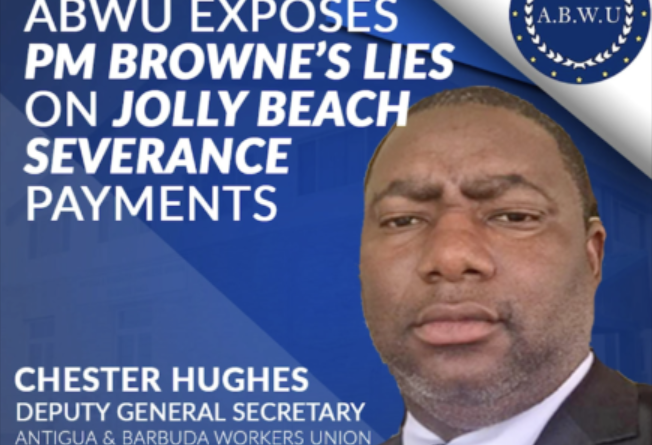 The Antigua and Barbuda Workers’ Union (ABWU) is accusing Prime Minister Gaston Browne of lying to the Nation about severance payments to the former Jolly Beach workers.

During a radio outing on Saturday, November 19, Browne said the Union had received the funds that are to be disbursed to the former workers, who have been waiting more than two years for their severance and gratuities.

Prior to that claim, Browne had told the Parliament that the money was in an escrow account, waiting for the company’s Receiver to make the payments.

His recent pronouncement has forced Deputy General-Secretary Chester Hughes to vehemently deny the allegation that the Union is withholding the ex-employees’ money.

Hughes says that ABWU is “amazed and amused” by the PM’s comments.  Based on the Union’s records – which its bankers can verify – he says no such funds were received on the former workers’ behalf.

Hughes also refutes claims by PM Browne that the Union has failed to sign off on certain documents.

The Deputy General-Secretary says that, based on recent conversations with attorneys representing Jolly Beach, they received the funds early last week.

Apparently, the delay in disbursing the funds is related to documents that were to be sent from the Survey Department, and these should have been received on Monday, November 21, according to Hughes.

He says the former workers should be able to start receiving their monies thereafter, once the figures are finalized.

Hughes is calling on the Browne Administration to stop its dishonesty regarding transactions related to the Jolly Beach Resort and its former workers.

Adding that this Administration has been less than friendly and accommodating to the rights of workers, Hughes accuses PM Browne of abusing both the working-class and the unions who defend them.

Hughes is putting Browne on notice that the Union is a serious organization that does not play politics in its representation of workers.

A meeting with the former workers was set for Monday afternoon at 3 p.m. to update them on the recent developments and how things will proceed going forward.

Facebook
Twitter
Pinterest
WhatsApp
Previous articleAppeal Court upholds conviction of ALP Seven who breached the Public Order Act more than a decade ago
Next article“We have to Put Our Foot Down!” Parents Comment on Recent School-Gang Attacks