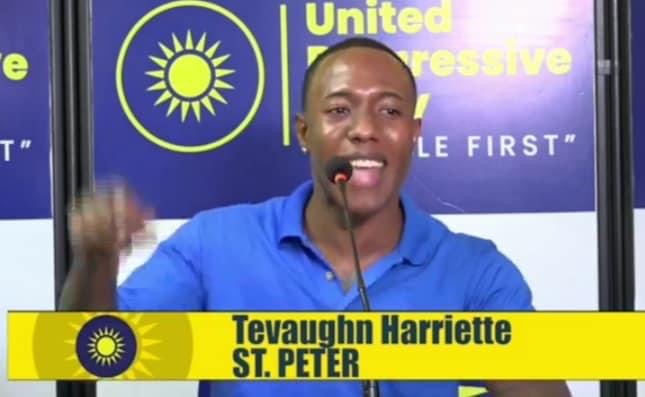 The United Progressive Party is continuing to set the Agenda into the modern era here in Antigua and Barbuda by holding its second virtual public meeting last evening.

Young Tevaughn “Peter Redz” Harriette scored the first electrifying goal with a passionate, powerful presentation for the St. Pater’s constituency. Harriette who came out swinging left and right like the opening act before the main event in a championship boxing match, set the pace for his other colleagues to follow.

Harriette a born native of St Peters, who hails from the village of Parham in the heart of the constituency spoke of the neglect the St. Peters Constituency has been suffering from bad roads, high unemployment and lack of proper representation.

From Paynters East to Wiers to Parham to Pares Village the roads are in deplorable condition. The Health Clinic is in disrepair and crying out for much-needed attention and the football field has no bathrooms or stands to sit on. He chided the present representative for lying to the people about spending 20million Parham football team.

He furthermore asks for improvement in the fisheries complex, so fisherfolks could ply their skill in a more comfortable setting.

He urged the constituents to give him their support because the United Progressive Party can do much better than what they are experiencing. The present Member of Parliament complained in Parliament of not getting any assistance from his government.

He chided the government for lack of attention to the Parham Police Station and the fact that the station is now located at the stadium in a ticket booth, he said the building which was demolished over 5 months ago, the rubbles are still there piled up in a stone heap. He noted the fact that officer gets dressed daily just to report to a ticket booth at the stadium, he considered this very demoralising to the Police Officers.

Finally, Peter Reds as he is affectionately called promised the St Peter’s Constituency that change is coming, he highlighted some of his plans for the constituency including seafood festival, yacht exhibition, farmers and craft market and the restoration of historical sites for locals and tourist alike.