Walker: “Barbuda Council is Standing with its Member Kendra Beazer” 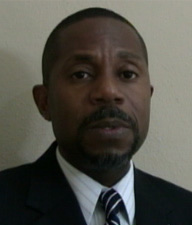 Member of Parliament for Barbuda, Trevor Walker, is giving the public all assurances that the Barbuda Council is standing with its member, Kendra Beazer, who has found himself in trouble with the law overseas.

“We are standing with you,” MP Walker said when he called into an Observer radio show to offer words of support to Beazer.

The 28-year-old Fulbright student is accused of assaulting several police officers who were apparently escorting him to a voluntary mental health evaluation after he reportedly displayed erratic behaviour in a Pennsylvania hotel.

“I just want him to know, and his family to know, we as Barbudans are praying for him and we know that the Lord is going to bring him through. We understand that being away from home what the situation can be,” Walker said.

Walker also claimed to have been in talks with Beazer’s lawyer to make arrangement to get him back to his homeland safely.

Beazer was arraigned early Monday before a district judge on charges including aggravated assault, disarming a law enforcement officer and resisting arrest.

Walker said some of the colorful reports made on social media about the incident were erroneous.

According to Walker, the first agent that was contacted about the altercation was the embassy of Antigua and Barbuda in New York.

“When the person went to see Kendra Beazer and saw him, the first agent was the embassy, so people can pick sense from nonsense. Nobody else had information on the matter other than the embassy in New York.

The fact that the information came out, people can draw their own conclusion,” he added. Prime Minister Gaston Browne has also pledged support to Beazer, and confirmed that the nation’s ambassador to the US is in discussion with stateside authorities to ensure Beazer’s safety.