I want to make it clear that I am not interested in a false display of camaraderie. 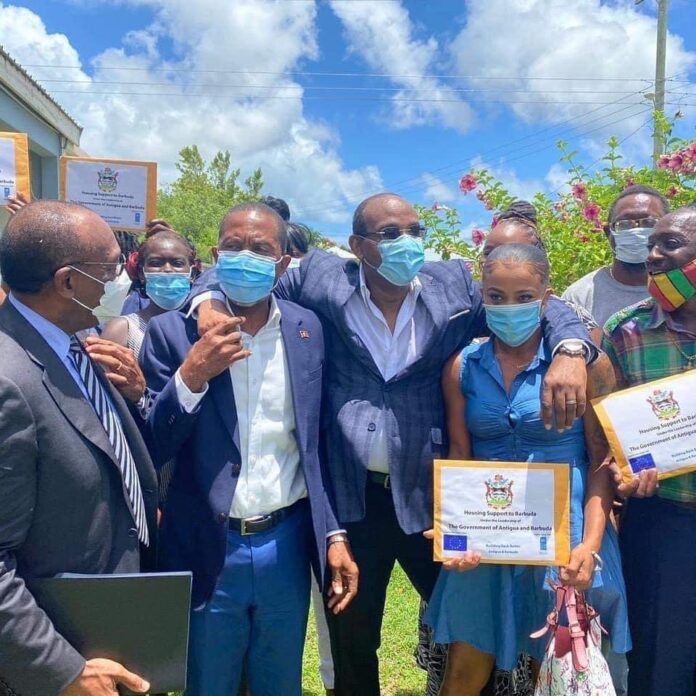 Twenty Barbudans are feeling grateful at this moment as they return to a sense of normalcy, especially now during the hurricane season. Special thanks to all the committed agencies, institutions and donors who’ve made this possible.

However, yesterday, Gaston Brown wanted to display to the world that the relationship between the two islands is strong as ever that he threw his hands over my shoulder which was just a photo op moment.

I want to make it clear that I am not interested in a false display of camaraderie.

I’m fully aware of others to whom Gaston Brown has done this disingenuous act, which doesn’t reflect reality of the relationship, and frankly made him uncomfortable.It is quite evident that the ABLP government has neglected Barbuda and is only interested in squandering our resources to their benefit without accountability.

The government of Antigua and Barbuda boasted of the efforts it took to get the Hanna Thomas rehabilitated, but not only did It took over 3 years to repair the hospital, which left Barbudans without proper medical services, but in a matter of weeks the government could’ve refurbish an entire ward at the old Holberton Hospital. Clearly, it shows that the people in this island doesn’t matter!

Gaston used the ceremony yesterday to speak about PLH, which he claims to be the savior for the state.  He saw it fit to mention the pros of this development, but did he ever give way to the concern citizens of Barbuda who’s livelihood is at stake? What about the inequities in the lease?  Where is the benefit for Bardudans? How will the people of Barbuda be compensated for the outrageous damages done at the Palmetto area? The people demand answers!

The people of Barbuda will not permit the PLH to continue to destroy our most precious assets in the Palmetto Point protected area and the Lagoon National Park. PLH has chosen to take cover under the PM, supplying him with video footage for him to use to denigrate elected members and Barbudans on his social media page. These actions and their total disregard and disrespect of the local government has made them not welcome here anymore. No amount of trinkets, inducements and photos ops will change that fact.

We will continue to denounce the disrespect towards our local elected members when trying to address issues surrounding the so called “peace, love and happiness. If the leader of the nation would utilize his power of persuasion which he claims to have and urge the developers to stop and consult with the Barbuda Council and the Barbudan people, it would show that he is somewhat concerned about the people of Barbuda.

Is Gaston Brown not attending to the cries of the people because he says that PLH is what the nation is depending on economically? Is this the breadbasket project? Then why is Gaston Brown withholding funds owe to the Barbuda Council?

The PM has continuously disrespected the people of Barbuda; Not only by withholding monies to the Barbuda Council, but by calling us all sorts of names (to include deracinated imbeciles, dunce elements, economic terrorist, squatters etc). We as a people should not be living under such leadership! It’s time the future relationship of the two islands be discussed with a view to free the people of Barbuda.

This government never had the best interest of the people of Barbuda at heart, but rather, they insist on exploiting the patrimony of the Barbudan people to enrich themselves.