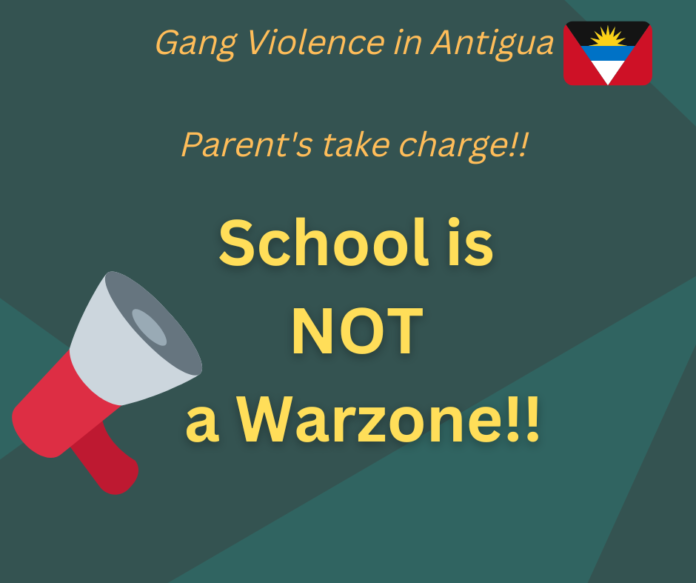 Following the recent string of violent gang related incidents among high-schoolers, in Antigua, parents are sharing their views on the matter; Most claim that the parents of the alleged gang members need to step up and intervene before it gets worse.

According to unconfirmed reports, the gangs are called “2Drilly” and “2Drilly Girls.” There have also been photos and other media circulating of the children sending threats to targets- usually of another gang called “700 Bones,” but sometimes to students who are not gang affiliated.

In one photo, a girl can be seen laying down with a knife on her chest; the photo was captioned “yah mussa feel me a smile.”

Antigua Trumpet, on Wednesday, spoke with a couple of parents who have secondary school children to get their views on the situation and any advice they may have in the matter.

“Some parents don’t really show their children real love, they tend to focus on material things, they don’t take the time to speak to their children and counsel them on life, and let them know about right and wrong.” said Nelly, a mother of a first former at Sir Novelle Richards Acadamy.

“We also have to consider that plenty parents work late hours or even work night shifts and they do not have the time to monitor what happens in the afternoons and evenings. But regardless of that, they need to make a stronger effort to control and guide their children.”

The mother continued by saying that if a parent is told by anyone, be it a teacher or a student that their child is in a gang at school, it is that parent’s responsibility to investigate and do something about it.

“Put down your foot! And find out what is happening. And take action! We also need to learn how to create bonds with our children, communicate with them. Children can be very idle, and they have so much influence from social media and the media on a whole. Don’t’ wait for the worst to happen”

Another parent, Josie, who says her 15-year-old daughter has been subject to bullying at CKHS said, “Providing for our children is way more than just making certain they are fed and putting a roof over their heads, giving them the latest clothing and tech. It’s about teaching them wrong from right, proper hygiene, being supportive, scolding them when needed, helping them to develop good moral value etc. it’s 7 days a week 24 hrs. of each day job that we must take seriously!”

Meanwhile, the police are now investigating an incident in which one Antigua Grammar School student was attacked and chopped about his body in the vicinity of his school. The boy even required emergency medical attention.

Another incident occurred just weeks ago when a student had his jaw dislocated in an ambush attack. The mother of that student took to social media furious and warned the parents of the 2Drilly Gang members that she would be taking action soon.

The police have also implicated several students in the involvement in these gangs, but have not announced a clear plan of action. They have received widespread criticism and have been accused of not taking the situation seriously.