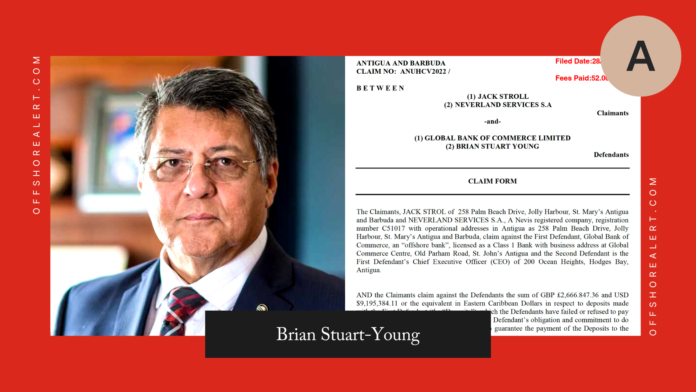 Offshore Alert- An offshore bank in Antigua – Global Bank of Commerce – is being sued by two depositors who claim they are unable to withdraw $9.2 million and £2.7 million from their accounts.

Attached to the complaint is purported email correspondence between Stroll and Stuart-Young from last year in which the latter essentially admitted his Bank was insolvent in that it could not satisfy its debts as they fell due.

In one email, Stroll was sceptical of a “repayment proposal” by Stuart-Young, telling the banker: “You have let me down so many times in the last six months. How do I trust what you are telling me is true? So far all your promises have come to nothing.”

Stuart-Young did not immediately respond to questions from Oshore Alert, including those whether the bank was insolvent, the date of its last audit, and the size of its assets and liabilities.

Remarkably, Antigua and Barbuda’s Prime Minister, Gaston Browne, was quoted in local news articles as describing the depositors as “greedy” for requesting the withdrawal of their funds.

On its website at globalbankofcommerce.com, Global Bank of Commerce is described as “the Caribbean managed and operated international bank, offering attractive financial products to its regional and international customers since 1983.

It was the first Bank to be licensed in Antigua and Barbuda under its International Business Corporations Act, 1982, and has the distinction of being the grandfather of international financial services operated in the jurisdiction’s Financial Centre.”

The Bank “is a member of the group of companies held by Executive Corporate Holdings Inc., an Antigua formed corporation”, it is stated on the site.