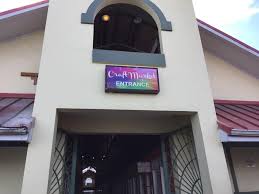 Frustrated tenants at the Craft Market are voicing their displeasure in an open letter to the St. John’s Development Corporation (SJDC) and complaining about the poor maintenance of the facility.

The tenants say the correspondence was also penned to bring awareness of the Corporation’s lack of responsibility in ensuring that they are treated fairly.

They complain of the “inaccessible bathroom (facilities), the unmaintained stores, the untidiness of the compound at times [and] rude employees,” among other vexing issues, and they want all of them to be addressed promptly.

Many of the vendor have been operating from the location for six to 10 years, and say that maintenance services were excellent up until the last two years.

It was their understanding, the tenants say, that any problems encountered with their stores would have been corrected by SJDC, which was responsible for such repairs.

Therefore, they say they have made numerous reports about termite infestation on their premises; the absence of proper light bulbs; and the need for many of the stores to be repainted and re-tiled.

However, the tenants claim that maintenance personnel have refused to address the many issues, reportedly because they do not  have the required tools or materials to get the jobs done.

Meanwhile, the disgruntled tenants say they have evidence that disproves the workmen’s claims.

The store owners are advocating for regular cleaning of the compound.  They say this would improve working conditions and help to eliminate the rodents, roaches and other insects that invade their stores because of the garbage and other waste that are sometimes left in the area.

These pests have been destroying some of their products, the tenants say, and, accordingly, they have losing revenue.

Finally, they complain about not being able to use the bathroom facilities.  This is because, in addition to the regular lock, a specialized padlock has been placed on the door, they say, and not all tenants have a key.

They speculate that the bathrooms are kept locked in order to minimize the cleaning crew’s workload.

The tenants conclude that they will not stop airing their concerns until their voices are heard and they are treated fairly.

Facebook
Twitter
Pinterest
WhatsApp
Previous articleBowen furious about the lack of consultation with residents on proposed Willoughby Bay development by Nigerian investor
Next articleDoE must tell the St. Phillip South community whether EIA has been done ahead of Willoughby Bay project, says Wehner