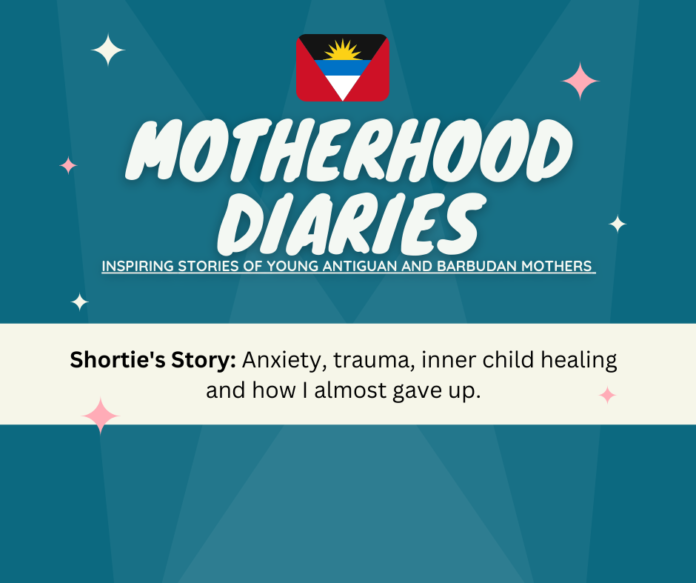 Mental health is a worldwide struggle, but in developing nations such as the Caribbean, it is one of the worst epidemics due to the stigma surrounding it, and the lack of access to resources and treatment.

In this edition of Motherhood Diaries, a young mother tells her heart-wrenching but inspiring story about her journey with Anxiety, depression, and more. She explains how she went from suicidal to hopeful with the help of professional therapy, support, and finding inner peace. Here is Shortie’s story:

“Okay, so let me start off by saying that I never believed in anxiety and that stuff. I used to laugh at people who had panic attacks. When they said they couldn’t breathe or started to shake, and I saw that they are perfectly fine, I would think that they were acting crazy.

Well, that stopped after I had my first encounter with anxiety:

It started in late 2019. I was in a very unhealthy, toxic, emotionally abusive relationship with this guy. For years I saw the red flags and couldn’t leave because he was all I knew. Because of trauma from my childhood of neglect, and not knowing what fatherly love was, I thought this was real love. Also, I did not have any positive family dynamics growing up.

He would openly cheat on me and tell me when he did it, knowing that it would damage my self-esteem. One day, he told me he was leaving, and I broke down and begged him not to. He stayed and continued to cheat. He would bring different women into the house, and I could not do anything about it.

That’s where my anxiety started. Whenever I wanted to confront him, I felt my heart racing like a racehorse. My mouth would get dry, and I felt like my lungs were collapsing. I ignored those symptoms. Nights were worse; I would wake up trembling and crying. I felt like I was gonna die.

I started getting nervous at work for no apparent reason. One day, I had an allergic reaction and fainted. I woke up in the hospital. Little did I know that this was the first of many emergencyhospital visits. Eventually, I was so exhausted. I didn’t know who to turn to. The emotional abuse continued and one day, my boyfriend found out that I was speaking to another guy and beat me up badly. He then had sex with me and told me that he loved me and would never do it again. It was at that moment that I felt completely lost.

Eventually, I moved out and started living with my aunt, but my anxiety episodes got worse and more frequent. I would have random heart palpitations, trembling, dizziness, loss of appetite, and severe depression. I couldn’t even take care of my 11-month-old daughter.  One night, on my 11th trip to the hospital, the doctor recommended that I visit Clarevue Psychiatric Hospital. By that time, I had done numerous EKGs, MRIs and Xrays, which had all come back normal, so he concluded that it was a psychological issue.

During this time, I had little to no support from my family. I felt all alone in the world. I was losing weight, began having suicidal thoughts, and also thought of taking myself and my child’s lives to end the misery. My family members did not understand what I was going through, and they gossiped about me instead of actually helping.

When I couldn’t take it anymore, I decided to seek the help that was recommended. At the clinic, the doctor diagnosed me with an anxiety disorder and bipolar depression. I started talk therapy and also got prescribed different anti-anxiety medications. Unfortunately, that did not help enough as I was still having symptoms and even started self-harming.

One day, I started listening to gospel music and realized that it helped me. I started praying and getting closer to God. I also started journaling and doing the things that made me happy, like going to the beach and spending quality time with my daughter. Today, I still have anxiety attacks, but it is not as bad as before.

I would say that I’m in the middle of my journey and I am still trying to find who I am and what my purpose is. But I wanted to share my story so that others with similar struggles can understand that they are not alone.

My message to young women in Antigua and Barbuda who may be suffering from mental health issues is to find their inner strength cause it’s there; Sometimes It just takes a drastic situation to reach it. Never lower your standards no matter what the situation is, and never allow anyone to diminish your self-esteem and self-worth. Always remember that If God didn’t have a purpose, you wouldn’t be here.