Landfill fire scorches up to three acres of wasteland 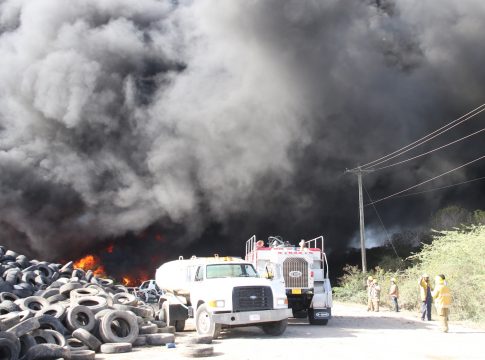 A fire that started on Friday at the Cooks Sanitary Landfill has caused a major setback at the National Solid Waste Management Authority resulting in the loss of a year’s worth of shredded tyres and scrap metal from more than 200 derelict vehicles.

Firefighters from the All Saints, St John’s and Coolidge fire stations all responded to the blaze which was extremely difficult to put out. As of Tuesday, the source remained unknown.

“All the area that was cut off became completely engulfed in flames and we lost everything in there and that would include all the shredded tyres that we shredded through in excess of a year,” said General Manager Daryl Spencer.

“Once the blaze was under control, it was the responsibility of the authority now to carry proper landfill management,” he continued.

The NSWMA used additional heavy-duty equipment to mine soil to control the flames late into Friday night and separated the debris to cut the fire off.

The NSWMA has pledged to implement mitigation measures to prevent such fires in the future.

“We’re going to be breaking the quantum of tyres that are in a pile and create breaks between them so, should something similar occur, we don’t run the risk of loss of all the tyres or the derelict vehicles, but also to protect our administrative building at the landfill and our equipment also.”

Facebook
Twitter
Pinterest
WhatsApp
Previous articleThe Women’s Forum of the United Progressive Party takes pleasure in saluting Sister Joan Peters as its “Woman of the Year” on this International Women’s Day 2022.
Next articleStudy links Even Mild Covid-19 to Changes in The Brain