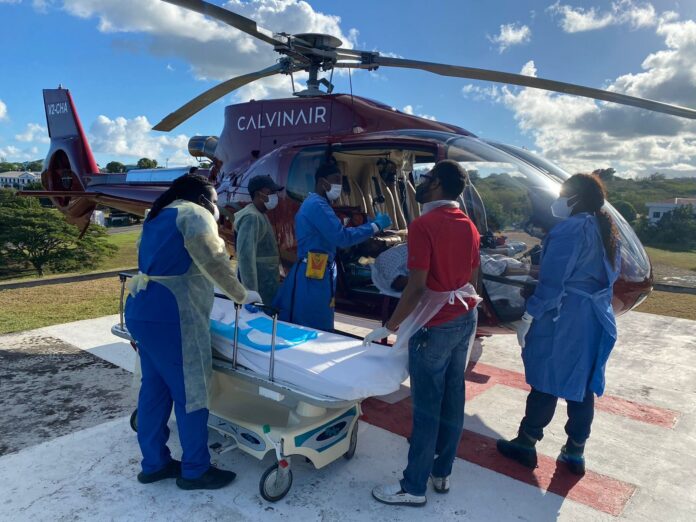 A 42-year-old man is now recovering at the Sir Lester Bird Medical Centre (SLBMC), after allegedly receiving a stab wound to the lower right abdomen on the sister-isle over the weekend. The patient was medically evacuated by CalvinAir Helicopters (CAH), to seek further surgical attention on the mainland.

According to Head Resident Doctor at the Hanna Thomas Hospital in Barbuda, Dr. Jeremy Deazle, the incident occurred on Saturday, January 29 at around 1:15am. “We would have liked to fly himout at that particular time but unfortunately, it is difficult to get emergency airlift at that time,” he said.

According to Dr. Deazle, the patient received initial medical attention at the Hanna Thomas Hospital and was in stable condition before CalvinAir Helicopters evacuated him at around 7:25am for further surgical treatment at the SLBMC.

“To date,” he said, “I can confirm that the patient has been warded and is doing well.”

General Manager and Chief Pilot of CAH, Mark Fleming said he received the emergency requestfrom Barbuda Council Secretary, Paul Nedd at about 2:30am, advising that there had been a stabbing incident that necessitated medical evacuation at sunrise.

“When I reached the hangar early in the morning,” Fleming recalled, “we got another call to say that two paramedics were required to travel with us on the helicopter, in the event immediate medical intervention was required. Thankfully,” he said, “we were able to land in Codrington in good time, collect the patient and deliver the patient safely to the hospital in Antigua.”

Paul Nedd, Secretary of the Barbuda Council, who was instrumental in making the emergency call to CalvinAir, said he was extremely grateful that CAH and the Ayre Group are fully committed to assisting in these matters of emergency.

“Calvin Ayre Helicopters was a superstar in assisting us in moving the patient from Barbuda to SLBMC,” Nedd said. “For that, I would like to thank the Chief Pilot, Mark Fleming, and thank the Calvin Ayre Foundation for getting involved. It shows how we can save lives when we work together.”

According to Ayre Group Media Relations Specialist, Jamilla Kirwan, over the Christmas holidays, the helicopter service also assisted in medically evacuating two emergency cases, one of which involved a heart attack victim, who was a guest at the Barbuda Ocean Club.

“So, CAH isn’t only able to assist in emergencies for residents,” Kirwan said. “As a tourist destination, visitors to our shores can also benefit from this service in the event of an emergency.”

According to Kirwan, the Calvin Ayre Foundation (CAF) covers the cost for emergency medical airlift for locals, as well as the cost for any search and rescue operation.

Kirwan confirmed that, commercially, flights cost US$2,000 (ECD$5,400). However, the decision to contribute flight time free-of-cost to emergency airlift was made by Chairman of the Ayre Group, Ambassador Calvin Ayre, under the mandate of giving back to the twin-island nation.