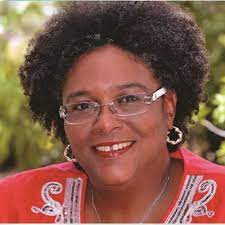 Mia Mottley, who shot to international fame during the Cop26 climate talks and oversaw Barbados’s break with the Queen last year, has won a second term as the Caribbean nation’s prime minister

The 56-year-old’s Barbados Labour party (BLP) won all 30 seats, up from 29 in 2018 in an election marred by complaints that thousands of Covid-positive Bajans were denied a vote.

Mottley came to international attention last year when she castigated global leaders at Cop26 and her government jettisoned the Queen as head of state, installing the singer Rihanna as an official national hero at the same time.

She also has star power at home, where she is known by her first name only. Her clean-sweep victory suggests voters did not blame her for the island’s tourism revenues falling by 90% during her truncated first term due to the Covid pandemic.

An 11th hour attempt to stop the poll failed on Tuesday night when the country’s high court ruled it had no jurisdiction to postpone the election, which took place amid rising Omicron cases.

Philip Catlyn, the opposition candidate who brought the case, had argued that 5,600 people in isolation were disfranchised after they were banned from going to polling stations to cast their vote. Anyone who tests positive on the island of 287,000 people has to wear a tracking bracelet to deter them from breaking quarantine.

As voting got under way on Wednesday, the Portuguese government announced measures to ensure that those infected with Covid could vote in that country’s snap general election later this month, fuelling accusations of unfairness.

Huge crowds celebrated into the early hours of Thursday outside BLP’s headquarters in the capital, Bridgetown, after Barbados’s midnight curfew was lifted for the night.

In her victory speech, Mottley said the landslide victory would allow her government to “lead the country first to safety and then to prosperity” and to prepare Barbados for the challenges “of the next 10 to 15 years”. These include climate change and antimicrobial resistance, she said.

Global heating poses an existential threat to Barbados. Last year the island suffered its first hurricane in 65 years and a storm with almost 500 lightning strikes in the space a minute, plus volcanic ash-falls from neighbouring St Vincent.

Though Barbados is reliant on long-haul flights and polluting cruise ships for much of its economy, Mottley was the breakout star of Cop26, taking global leaders to task for their inaction on climate change.

At the BLP’s final rally on Tuesday, Liz Thomas, Barbados’s ambassador for climate change, reminded the crowd of the US president, Joe Biden, walking hand in hand with Mottley: “White people from all over the globe say to me: how do I get a Barbados passport? Caribbean people say to us: ‘How do I get a Mia Mottley?’, ‘I wish we had a Mia, give us Mia, lend us Mia’, but Barbados got Auntie Mia,” she said.

Basking in her second straight landslide, Mottley promised to uphold the values of Errol Barrow, the first post-independence prime minister of Barbados, who said the country would be “a friend of all and a satellite of none”.

Despite the BLP’s thumping victory, Cynthia Barrow-Giles, professor of constitutional governance and politics at the University of the West Indies, believed Mottley’s imposition of republicanism without a referendum had turned some voters away from the BLP.

“People are so angry they were not consulted by the prime minister. They see it as an authoritarian tendency and autocratic,” she said. Barrow-Giles and a colleague polled Bajans and found while only a minority wanted to retain the British monarch as head of state, most objected to the lack of consultation.

Though the BLP’s lengthy manifesto made numerous eye-catching promises, such as building 10,000 homes and investment in the medicinal cannabis industry, Mottley’s second term is likely to be dominated by recovering and diversifying the Bajan economy, post-Covid. As part of a loan deal with the International Monetary Fund, the Barbados government needs to achieve a 6% surplus of GDP, which may lead to austerity measures, said Barrow-Giles.

One of Mottley’s preoccupations is also addressing Barbados’s ageing population via immigration. She wants to attract more “digital nomads” to the island and lure back the Bajan diaspora, repeatedly saying on the campaign trail that the island “hasn’t replaced its population since 1980”.

The main opposition, the Democratic Labour party, which ruled Barbados between 2008 and 2018, campaigned against the BLP “one-party state”. Voters were not convinced and Barbados will have no official opposition for the next five years.

… we have a small favour to ask. Millions are turning to the Guardian for open, independent, quality news every day, and readers in 180 countries around the world now support us financially.

We believe everyone deserves access to information that’s grounded in science and truth, and analysis rooted in authority and integrity. That’s why we made a different choice: to keep our reporting open for all readers, regardless of where they live or what they can afford to pay. This means more people can be better informed, united, and inspired to take meaningful action.

In these perilous times, a truth-seeking global news organisation like the Guardian is essential. We have no shareholders or billionaire owner, meaning our journalism is free from commercial and political influence – this makes us different. When it’s never been more important, our independence allows us to fearlessly investigate, challenge and expose those in power. (The Guardian)

Facebook
Twitter
Pinterest
WhatsApp
Previous articleBarbados situation spurs UPP to call on ABEC to ensure that no voter is disenfranchised
Next articleMore than one thousand active Coronavirus cases in Antigua and Barbuda.