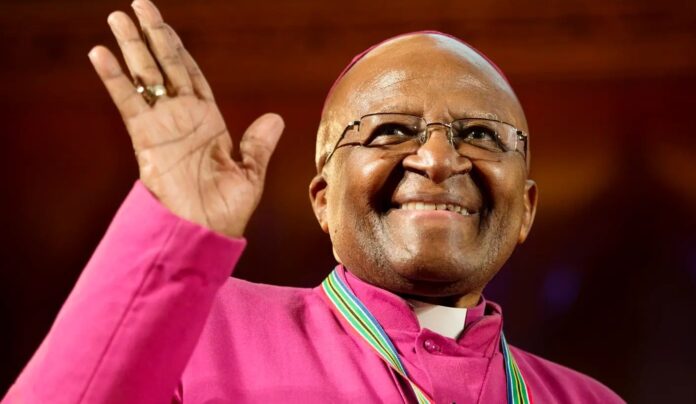 He was a force to be beckoned with; a patriot without equal and one of the most important parts of Black history. Desmond Tutu- South African Anglican bishop, theologian, Nobel Peace Prize Winner.

His titles were many, but he will be remembered mainly for one thing- his commitment to the empowerment of Africans and more specifically his anti-apartheid activism.

Since 2014, The Arch battled an illness that had him in and out of hospital. On Sunday, his death was confirmed in a statement by South African President Cyril Ramaphosa.

“A man of extraordinary intellect, integrity and invincibility against the forces of apartheid, he was also tender and vulnerable in his compassion for those who had suffered oppression, injustice and violence under apartheid, and oppressed and downtrodden people around the world,” Ramaphosa said.

President Joe Biden also mourned Tutu saying, “His courage and moral clarity helped inspire our commitment to change American policy toward the repressive Apartheid regime in South Africa,” the President said in a joint statement with first lady Jill Biden. “His legacy transcends borders and will echo throughout the ages.”

Queen Elizabeth II offered condolences and described Tutu as “a man who tirelessly championed human rights in South Africa and across the world”, and that his loss will be felt by the people across the Commonwealth, where “he was held in such high affection and esteem.”

Desmond Mpilo Tutu was born on 7 October 1931 in Klerksdorp, northwest South Africa. Later in life he would describe his family as poor saying that “although we weren’t affluent, we were not destitute either.” Tutu started college but couldn’t afford tuition, therefore he turned to teaching. In 1951, he obtained a government scholarship to start a course at Pretoria Bantu Normal College, a teacher training institution.

In 1954, he began teaching English at Madibane High School and the following year he transferred to the Krugersdorp High School, where he taught English and history.

By the 1980s, Tutu was an icon for many black South Africans, a status rivalled only by Mandela. In August of 1983, he became a patron of the new anti-apartheid United Democratic Front (UDF). In 1984, Tutu embarked on a three-month sabbatical at the General Theological Seminary of the Episcopal Church in New York where he was invited to address the United Nations Security Council.

He also received the Martin Luther King, Jr. Nonviolent Peace Prize. In 1986, he became the first black person to hold the post of Archbishop of Cape Town.

Tutu and Nelson Mandela met for the first time in 35 years at Cape Town City Hall. Tutu invited Mandela to attend an Anglican synod of bishops in February 1990, at which the latter described Tutu as the “people’s archbishop.” There, Tutu and the bishops called for an end to foreign sanctions once the transition to universal suffrage was “irreversible”, urged anti-apartheid groups to end armed struggle, and ban Anglican clergy from belonging to political parties. Years later, he was the one to plan the religious component of Mandela’s inauguration ceremony.

Tutu died from cancer at the Oasis Frail Care Centre in Cape Town on 26 December 2021, at the age of 90. His daughter Naomi Nontombi said, “He was ready. He went to meet his God, ready and willing.” She also described her father as a hugger who was “so open with the fact that he loved us”.