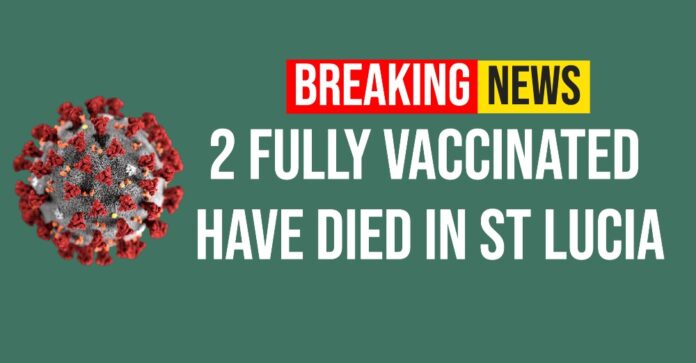 AT – In a shocking revelation, the Ministry of Health, Wellness and Elderly Affairs confirmed that two persons who were fully vaccinated have died of COVID-19 disease in St Lucia.

Health Minister Moses Jn Baptiste said that the death of these two fully vaccinated individuals illustrated the changing nature of the COVID-19 pandemic. According to officials, both deceased had co-morbid conditions.

Medical Director at the Respiratory Hospital, Dr Alicia Eugene-Ford said that both of the individuals were admitted to the hospital as they were tested positive but in addition to that they were also suffering from other diseases. She added that the other diseases include sickle cell, end-stage renal disease, diabetes and cancer.

“If you see at our admissions, from February till present you’re seeing at 1, 460 admissions and I am speaking about persons who were ill and to be admitted – persons who arrive at the emergency room that come in and the doctor may determine they’re not sick to be admitted. You can go home on quarantine or you can go on home isolation. So this 1,406 are truly from patients who are sick and admitted. Out of those, we have 20 fully vaccinated individuals,” Eugene-Ford described.

She regarded that the symptoms of those people were milder than others who had comparable ‘clinical pictures’ and were not vaccinated.

“Out of that twenty we have, we have two recent deaths after the verification method,” the Medical Director said. According to health officials, one of the deaths had previously been reported before confirming the vaccination status. And the second death was at the time, yet to be confirmed as a fully vaccinated person.

“We are operating along with them to familiarise them with our work methods. We have received a few team members from the Owen King European Union Hospital to enter the team and the Ministry of Health, which is our origin ministry, has been hiring individuals who are not clinical but are porters and domestics and ancillary workers, which would enable us to work adequately,” Dr Alisha Eugene-Ford said.

The Minister of Health said that the government’s priority has been to provide much-needed additional support to the public health system, especially that part that directly impacts COVID-19.

Jn Baptiste said situations at the Respiratory Hospital have been improved to assure the humane quality of care.