Biden ahead in Pennsylvania and Georgia 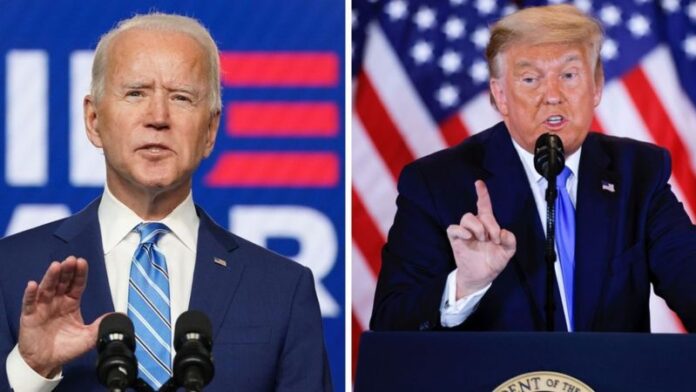 BBC – Democratic candidate Joe Biden has pulled ahead of Donald Trump in Pennsylvania, a key state in the US presidential race, results data show.

Mr Biden is leading by nearly 10,000 votes, with 98% counted. If he takes the state, he will win the election.Earlier, Mr Biden edged ahead of his Republican rival in Georgia, another key battleground state, where a recount will now be held. Meanwhile, the Trump campaign said: “This election is not over.”

In a statement, Trump campaign lawyer Matt Morgan claimed without evidence that ballots in Georgia were “improperly harvested” and that in Pennsylvania election observers were not given “meaningful access” to counting, despite a judge’s order allowing them further access on Thursday.

Mr Biden currently has 253 Electoral College votes, while Mr Trump has 214. To win the White House, a candidate needs 270. Some news organisations have a higher tally for Mr Biden, having projected a win for the Democrat in Arizona. But the BBC considers the state too early to call.

Pennsylvania, where Mr Biden was born, has 20 Electoral College votes. If the Democrat wins it, he will secure the victory with 273 votes. Pennsylvania has always been a major political battleground. The state voted Democrat in six consecutive races before it swung to Mr Trump in 2016.

In Georgia, Mr Biden is currently leading with more than 1,500 votes, with 99% of the ballots counted. Georgia’s secretary of state said there would be a recount because the margin was so small.

Georgia is a traditionally Republican state and has not been won by a Democrat in a presidential race since 1992.

Mr Trump’s team says legal challenges and recounts in some states will favour them.

Bob Bauer, a Biden campaign lawyer, says the lawsuits are legally “meritless” and designed “to message falsely about what’s taking place in the electoral process”.

The vote is also currently too close to call in Nevada and North Carolina.  A win in just Pennsylvania, or two of the other four remaining states would be enough to confirm Mr Biden as president-elect.  Mr Trump, meanwhile, would need to win Pennsylvania and three of the remaining four states.