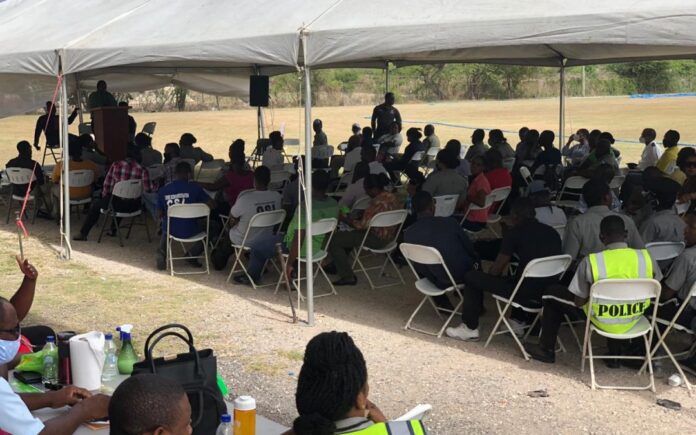 The Police Welfare Association (PWA) is calling its membership to a meeting on Wednesday, October 28, to address a number of troubling issues.

This is the second such meeting since June, when the Association last met with its membership to discuss working conditions and risk allowance, among other things.

This time around, the PWA will be addressing the issue of the Parham Police Station, where two weeks ago, officers had to deal with a leaky roof.  The leak caused rain water to run onto areas where files are kept, with most of the water running close to electrical ducts.

The Government had pledged to relocate the officers from that station as construction work on a new building commences.   However, since the promise was made in June, and up until today, the officers remain in the dilapidated structure.

Regarding an issue being dubbed “Us Against Them,” the PWA is set, again, to discuss the mandatory retirement age of 65.

The non-gazetted officers believe the retirement age should remain at 60, while their gazetted colleagues reportedly have consented  to the five-year increase.

If officers proceed on retirement at age 65, it is unlikely that they will be able to fully enjoy their retirement, Harris says.

Officers are also scheduled to receive an update on a recently held meeting between the PWA, the police hierarchy, and the Minister responsible for Public Safety, Attorney General Steadroy “Cutie” Benjamin.

The PWA adds that “many other issues that are affecting the general membership” will be discussed.

Wednesday’s meeting is expected to begin promptly at 8 a.m. at the Police Recreation Grounds, and officers are asked to attend and be on time.

The Association reminds that all the established health and safety protocols will be observed, such as the wearing of masks, hand sanitization, and physical distancing

Facebook
Twitter
Pinterest
WhatsApp
Previous articleFour (4) Government institutions on Friday were the recipients of a generous contribution of rice
Next articleASC student confirmed as new domestic COVID case, while national returning without test is identified as ‘imported’