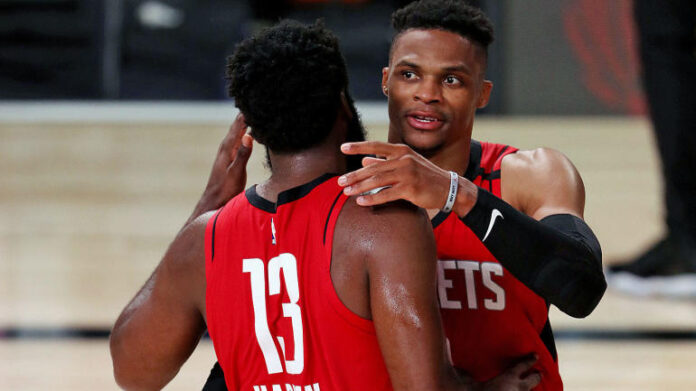 Stylistically, the Houston Rockets and Dallas Mavericks are nearly identical teams. They mirror their best players, as James Harden and Luka Doncic represent the closest replicas of one another anywhere in the basketball world. Defense is not a strong point, but points come with remarkable ease. On Friday, the Rockets outlasted the Mavs by a score of … wait for it … 151-146 in overtime.

Do the math, and that’s 80 combined points from Houston’s star duo. They also combined for 20 rebounds, 16 assists, five blocks and four steals. They were, to put it mildly, sensational. And that’ll have to continue to be the case if Houston is going to make a run in the playoffs. Maybe not this sensational, but pretty darn sensational.

The Rockets are playing uphill with their super-small lineups. The Mavericks got into the lane and to the rim with laughable ease on Friday. The Rockets gave up 13 offensive rebounds and lost the overall rebound battle by a margin of 15. Second chances kill you in the playoffs. Battling consistently bigger teams is going to wear Houston down, and they’re going to give up a lot of points; they can’t give up 146 points, obviously, but they’re going to give up points. The idea is to just score more.

That’s why they traded Clint Capela and brought in Robert Covington, to space the floor with five shooters and no big man in the lane, leaving the rim wide open for attack. That strategy was primarily devised for the benefit of Westbrook, who can’t shoot but remains one of the most ruthless penetrators in NBA history. If he starts settling for threes and mid-range pull-ups, forget about it. On Friday, 12 of his 13 buckets came in the paint, and 11 of them were layups. That is gold for the Rockets.

And that’s what happens when Harden is cooking, as he certainly was on Friday, going 6 for 6 from the field for 23 points in the first quarter en route to a 14-for-20 night that included 21 free throw attempts, 18 of which he knocked down. Teams have to send two or even three defenders at Harden when he’s rolling like that, and that’s when Westbrook can take over. The two plays below illustrate how devastating Harden and Westbrook can be together when Harden gets doubled, becomes a willing passer, and there is no big man to deter Westbrook at the rim.

That’s how Westbrook has been attacking since the calendar turned to January, when he cut his 3-point attempts to fewer than three per game. Over that 10-week span, Westbrook, including Friday night’s game, is averaging over 31 points a game on better than 52 percent shooting.

Harden is Houston’s best player, but I continue to believe that Westbrook is its most important. With almost five months of rest, Harden is going to be fresher than he’s ever been in the postseason, and he’s going to score huge. You can count on that. The question remains whether Westbrook will remain disciplined with his shot selection and continue to punish teams for doubling Harden with relentless and successful rim attacks.

He did that on Friday. And the Rockets won. It’s a lot to ask for Harden and Westbrook to keep putting up these kinds of numbers, but that’s the only way the Rockets can compete with the best teams. And truthfully, there’s plenty of evidence they can keep this up.

Fifa Orders Russia Not to Compete Under National Flag

China- All Footballers Banned from Getting Tattoos