HomeWorld NewsCoronavirus: Why Pakistan's doctors are so angry
World News

Coronavirus: Why Pakistan’s doctors are so angry 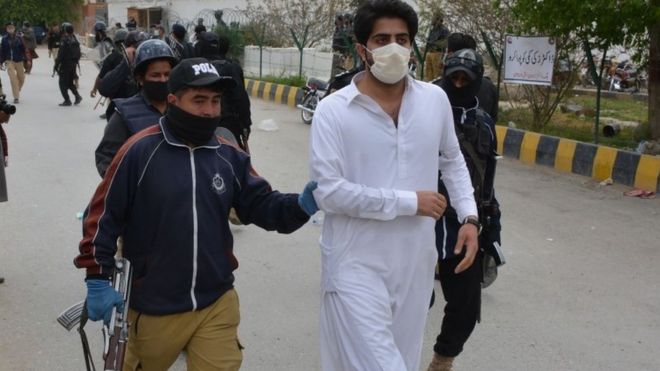 It was supposed to be just a picture of Pakistan’s president taking precautions during an official meeting.

But instead the image of President Dr Arif Alvi wearing the high-end N-95 medical mask – tweeted out on social media – has further inflamed tensions between Pakistan’s government and those on the front line of the fight against coronavirus.

The Pakistan Medical Association (PMA) noted that while “politicians and bureaucrats are often seen wearing N-95 masks during meetings and visits… health professionals are facing a dire shortage of (these masks) and PPE (personal protective equipment)”.

Indeed, while many countries around the world regularly take to the streets to applaud their health workers during the crisis, doctors in one city – where almost 25 medical officials have already tested positive – were beaten by the police, for daring to protest over the lack of PPE.

Dr Alvi has since explained that he was given this mask in China during a recent visit and had been re-using it until its straps broke. He is now using a common face mask.

PPE shortages have been in the headlines ever since the coronavirus pandemic struck early last month, mainly because it was an unprecedented situation and the magnitude of demand could not have been foreseen.

For the 200,000 or so practising doctors in Pakistan, the outbreak came just six months after they were stunned by a controversial government decision to close the country’s top health professionals’ regulatory body, the Pakistan Medical and Dental Council (PMDC).

That decision left 15,000 fresh medical graduates without certification, while around 30,000 doctors still await their routine five-year registration renewal which is necessary for them to continue to practise medicine in Pakistan and abroad, a source in the PMDC said.

The near absence of protective gear triggered unrest among this already strained community, with doctors all over the country resorting to brief protests and strikes.

Image caption There were clashes between police and doctors in Quetta

But nowhere were these protests as violent as in Quetta – and there are some good reasons for this.

Balochistan province is already under-resourced, with only two tertiary-care hospitals, both in Quetta, the capital. The region has often been politcally neglected. A low-intensity separatist insurgency has been going on for two decades.

The province was also the first recipient of coronavirus, which arrived with the thousands of pilgrims who crossed over from Iran during February and March.

Soon after the virus was detected, the government set up a quarantine camp at the Taftan crossing, but the arrangement was “grossly inadequate and unprofessional”, says Dr Yasir Khan, president of the Balochistan chapter of the Young Doctors’ Association (YDA).

“People were crowded together in tents so that those who had no infection also got infected,” he says.

Concerns were further raised when 40 out of the 96 people who tested positive in Quetta some two weeks ago were found to have no travel history, indicating community transmission.

As doctors demanded protection, supplies were arranged by the federal government, and the hospitals were made to sign receipts for N-95 masks.

But they turned out to be K-95 masks, mostly used by barbers and beauticians in haircutting salons, Dr Shah says.

At least 17 doctors and five paramedics in Quetta have so far tested positive for Covid-19. Even more worryingly, none of Quetta’s infected health workers were involved in directly handling coronavirus patients, Dr Khan said.

It is not the only affected province: according to the YDA, 16 medics are infected in KP, and there are reports that two doctors have died in Gilgit-Baltistan region and Karachi. The federal health ministry was repeatedly approached by the BBC to confirm country-wide infections among health professionals, but it did not respond.

By Wednesday, tensions had reached boiling point. Hundreds of doctors and paramedics went on strike, gathering at Quetta’s Civil Hospital, from where they started a protest march towards the chief minister’s residence.

Police stopped them halfway to the venue, and when they tried to break through the cordon, they were pounced upon and beaten with sticks and fists.

Many were injured, and more than two dozen were arrested.

They have since been released and have decided to call off their strike. But their protest continues as PPE supplies, which the government claims to have dispatched, have yet to reach them.

Have Researchers Found the Cause of Sudden Infant Death Syndrome (SIDS)?

The Summit of the Americas – wise heads should prevail

Queen to skip Parliament opening for the 1st time in decades