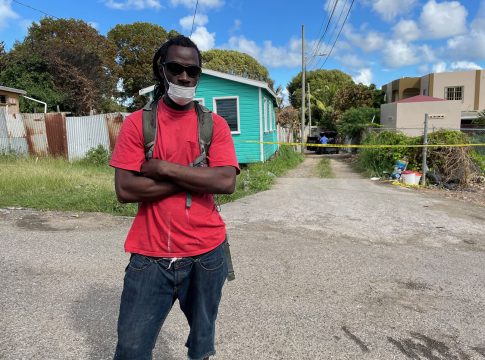 Micheal Cummins of Nut Grove is hanging on to thin threads of faith that the body discovered yesterday amongst rubble is not that of his missing 16-year-old son.

The 44-year-old cockle seller and landscaper says he had been searching for his son Dequan Cummins since Monday. He described his son as a child who loves plants, along with playing football and basketball and stated that he had been solely raising the boy for 14 years.

Yesterday morning, officers retrieved a charred human body from the scene of the fire which ravaged 3 properties in Nut Grove on Monday.

Cummins explained that while he was told that his son was seen running from the scene, he is yet to be found.

“I was told me son ran and now I cyarn find he,” he said in a recent interview.

“Me cry morning, noon and night,” he said “Me tryin’ to keep me tears to meself; sometimes me get nervous and me break down.

The father of four is now awaiting the DNA results from Barbados that could take days or even weeks. Meanwhile, the police are still conducting their investigations into the matter.