What is Quiet Quitting and Why is it Happening? 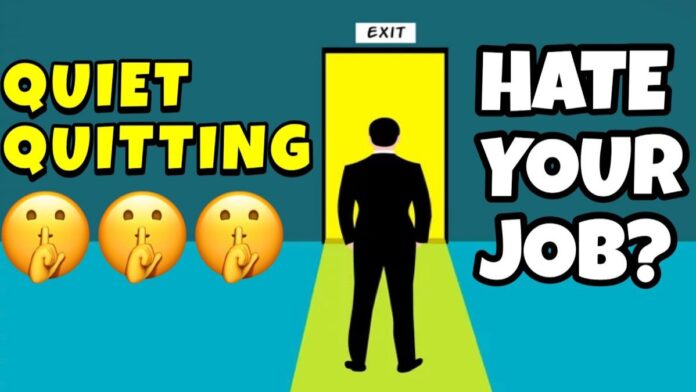 It’s the latest buzzword in the work world. It may sound like it, but it doesn’t necessarily mean abruptly quitting your job like a badass.

So what exactly does this term mean, have you witnessed it happen and is it an impending nightmare for companies and employees on our little rock of paradise?  But first, let’s look at where it came from.

Now, if you’ve ever work a 9-5, you know what this feels like: long hours, overtime, way more tasks than your contract stated, being treated like trash every now and again…..all while being paid minimum wage or way below what you deserve for the work you actually put in.

Some experts believe that the trend began after The COVID-19 pandemic which cause major disruption with restrictions, lockdowns and mandates which collectively caused made scores of millennials to rethink their career choices. The main realization? Contrary to what we were taught, jobs were not the best way to build wealth.

A rise in unemployment bred freelance and entrepreneurship mindset, while work from home lifestyles drove people to break away from the constraints of working 9-5 in an office where their hard work went unnoticed.

While at home, it’s evident that everyone had the time to evaluate themselves, their goals and their perspective on working.

According to the U.S. Bureau of Labor Statistics, 71.6 million people left their jobs from April 2021 through April 2022, which averages 3.98 million people quitting monthly and by June 2022, that number of reached 4.2 million, per month.

So what is Quiet Quitting?

Quitting is a term that surfaced on TikTok this year and it refers to a subtle yet significant rebellion against the culture of overworking while being underpaid and underappreciated in a workplace.

Simply speaking, it’s when a worker starts limiting their tasks only to those within their job description, setting a boundary that will allow them to better manage their mental health and their work-life balance.

Now speaking about mental health, quiet quitting might be seem as a coping mechanism for workers who are dealing with burnout. As a matter of fact, if employers take note, this new trend could reset the way they treat their employees.

Although the term is now surfacing, it has been done for years across the world. Many people do not feel fulfilled in their jobs. This leads to depression, demotivation and anxiety and more.