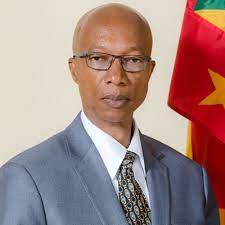 Grenada – For yet another year the workers at the Grenada Ports Authority have engaged in mild industrial action, due to the organization failure to accede to their demands.

Payment of bonus, regularization of workers, increased salaries are among some of the gripes the workers are upset about.

The union head in leading the charge says continued protest depend on managements eagerness to address the matter.

Workers at the Grenada Ports Authority are not letting their guards down and is standing firm against what their union representative terms to be gross disrespect on the organization’s behalf.

Early Monday morning the workers were visibly seen in union T Shirts standing outside the Grenada Ports Authority, in protest against -unresolved matters; Bonus and the organization failure to uphold an agreement.

Represented by Technical and Allied workers union, the workers were addressed by the President and was given the mandate to do what is necessary to ensure that the matters are resolved by January of 2022.

President General Andre Lewis said one of the matters dates back to 2020, which is the issue of bonus, he is adamant that this matter must be resolved considering is one year late.

He also stated that the union has written to the organization about the bonus issue however to no avail.

How far is the union willing to go? The union president said as far as it takes, but the success or lack thereof depends solely on the organization willingness to address the matters.

While the weather may be a bit overcast the workers took the decision to not return to work today, the question is whether or not they will be outside on Tuesday is undetermined.

Meanwhile all business under the bargaining unit of the Technical and Allied Workers union either has been written or will be very soon to accede to follow in government footstep and pay from line workers either one month or half month salary in December.

President of the Union Andre Lewis says a number of businesses on Friday already received their letters, imploring upon them to do the right thing.

The 2021 was a tough period for all and workers in some instances have gone above and beyond, therefore there are deserving of that extra income.