Is Amazon to Blame For Tornado Victims Who Perished in Warehouse? 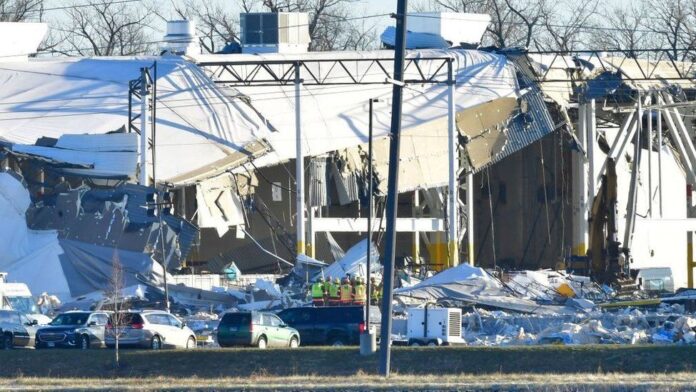 Chicago, Illinois- Families have laid claims that Amazon may be to blame for the death of her brother during one of the many tornadoes that ravaged the southern US states last Friday.

Reports confirm that an Amazon warehouse collapsed, claiming the lives of 6 workers and injuring many others. Several family members have expressed that Amazon’s lack of empathy may be to blame for the tragedies.

One woman who lost her brother said that the company could have done more to ensure the employees all got out alive.

“This never would have happened if they cared about lives over productivity,” she said in a social media post.

Clayton Cope, spoke to his family shortly before the building in the was struck and his mother Carla, said she had called him to warn of the tornado’s approach.

“We told him it looked like the storm was heading that way and that he needed to get to shelter,” Carla said in an interview.

Clayton, who had previously trained in the US Navy, told his mother that he would first warn his co-workers before seeking shelter.

“No-one would have been frantically getting to the shelter last minute and my brother wouldn’t have had to help people get to the shelter and put his life at risk,” the victim’s sister wrote. “I want them to answer for this, I want this to be a starting point of places taking the lives of their employees seriously and treating them as more than a number.”

These stories have since raise speculation into whether there was adequate shelter available for workers who have since confessed that management had directed them to shelter in bathrooms.

Meanwhile, Amazon has refuted these claims, saying that its team worked quickly in response to the impending tornado. Following the tornado warning, company procedure was for all employees to be “notified and directed to move to a designated and marked shelter in place location.”