Liberta man found in possession of firearm and ammunition is arrested, detained and being questioned by Police 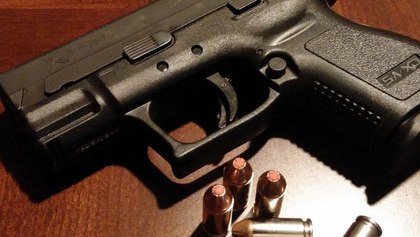 A Table Hill Gordon, Liberta, man is in the proverbial hot water after he was found with an illegal gun and ammunition on Wednesday, July 20.

The 24-year-old man was picked up on Armstrong Road, during a police mobile patrol, at around 12:30 p.m. on the day in question.

Officers say they saw the man acting in a suspicious manner and approached and stopped him. Later, a search of his person was carried out, and one 9 mm pistol and nine matching rounds of ammunition were found in his possession, in a bag he was carrying across his chest.

He was arrested and taken into custody and investigations are ongoing.

The Liberta resident is likely to face charges of illegal possession of a firearm and ammunition.

Meanwhile, as thieves continue their rampage across the island, a recent attempt to break into a Heritage Quay store was foiled.

The Police are now probing the attempted break-in of Champion Footwear earlier this week, as reported by the manager of the business.

During the attempted offense, someone was attempting to use a hard object to pry open the lock of an east-facing door. However, that person apparently was interrupted by a passer-by and he fled the scene.

This incident reportedly occurred between the evening of July 18 and early the next day.( Real News)