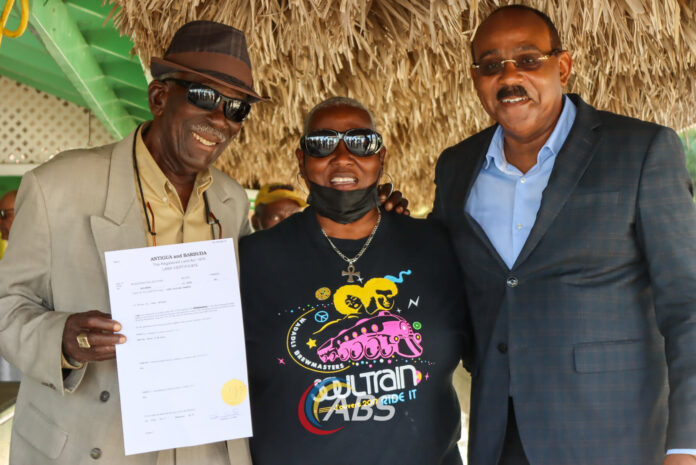 The land recently transferred to the ownership of Sir McLean Emanuel, otherwise known as King Shortshirt, has become the centre of a family controversy.

Sir McLean’s son, Anthony “Tony” Emanuel, and his partner, Judy McCoy, have found themselves at risk of being thrown off the beachside land on which they have operated their business – Tony’s Watersports Bar and Grill – for nearly 30 years.

The transfer of land officially took place in February on the occasion of Sir McLean’s 80thbirthday, after the Administration declared that he had occupied the land “for almost 50 years and has been operating Shorty’s Beach Bar and Restaurant and Entertainment Centre for decades.”

In a letter to the Cabinet dated March 11, Tony and McCoy have advised the Cabinet that “Sir McLean Emanuel has never occupied the parcel of land to which the Cabinet refers” and that “Shorty’s Beach Bar and Restaurant and Entertainment Centre ceased to operate/exist when Hurricane Luis destroyed that business in 1995.”

The couple also point out that the land on which Shorty’s Beach Bar operated and the land they now occupy are distinctly separate, according to the Land Registry.

In fact, Sir McLean already holds title to the land on which he ran his business, since it was transferred to him by the United Progressive Party (UPP) Administration.

Despite this, over the years, Tony and McCoy have received from Sir McLean’s lawyers several Notices to Quit, advising them to vacate the premises that they insist he has never owned nor occupied.

Their letter reports that, in response to a notice in May 2017, the couple’s lawyers wrote to the Ministry of Agriculture, pointing out that they had operated without hindrance for more than 26 years.

They noted that being forced to move would disrupt their business and threaten the stability of their family life, and, therefore, the couple would like to purchase the lot on which they were operating.

“To date the Ministry of Agriculture has not provided any response to Lake and Kentish’s letter of May 16, 2017,” the letter to Cabinet states.

Given these circumstances, Tony and McCoy are now appealing to the Members of the Cabinet “to have consideration for two young Antiguan entrepreneurs who have put their life into developing a successful business enterprise.”

The two detail the bank loans they have taken out to acquire buildings, boats, and equipment and to educate their children – in addition to the money and work invested in rebuilding after the devastation of Hurricane Luis in 1995 and rejuvenating after the pandemic.

Transferring this second parcel of land to Sir McLean Emanuel, they say, would result in them being “unable to provide for ourselves, pay outstanding loans and other obligations.  The end result would be that the Banks would take possession of the security and sell the same and reduce or liquidate our loans.”

They are requesting, therefore, to be allowed to purchase the parcel of land they have occupied for three decades.(Real News)

Facebook
Twitter
Pinterest
WhatsApp
Previous articleConsultation with Stakeholders a Missing but Necessary Element in Maternity Leave Extension
Next articleFuel prices remain at $15.70 per gallon for gasoline