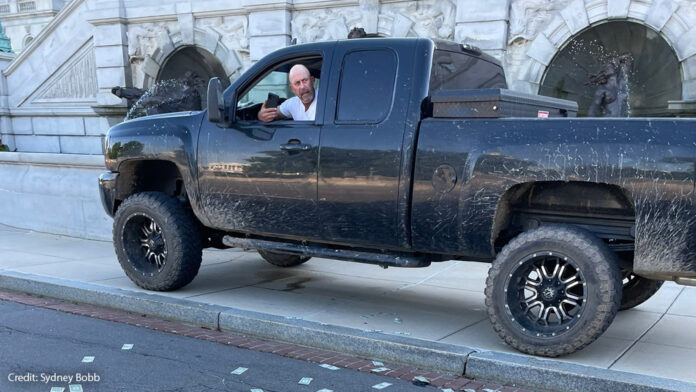 WASHINGTON (AP) — A man sitting in a black pickup truck parked on the sidewalk outside the Library of Congress told police he had a bomb Thursday, triggering a standoff in the heart of the nation’s capital.

Officials evacuated a number of buildings around the Capitol and sent snipers to the area after officers saw a man holding what looked like a detonator inside the pickup, which had no license plates. The man was identified as Floyd Ray Roseberry, 49, of Grover, North Carolina, according to two people briefed on the matter. Congress is in recess this week, but staffers were seen calmly walking out of the area at the direction of authorities.

Police negotiators were communicating with Roseberry as he wrote notes and showed them to authorities from inside the truck, according to the two people and a third person also briefed on the matter, all of whom spoke on condition of anonymity because they were not authorized to publicly discuss the matter.

Authorities were trying to determine whether it was an operable bomb, the officials said. Police gave no immediate details on his motive or any demands.

“My negotiators are hard at work trying to have a peaceful resolution to this incident,” U.S. Capitol Police Chief J. Thomas Manger said. “We’re trying to get as much information as we can to find a way to peacefully resolve this.”

While police continued negotiations, video surfaced of Roseberry on Facebook Live inside the truck, which was stuffed with coins and boxes. He was threatening explosions, making anti–government threats and talking about what he believes are the ills of the country, including the U.S. position on Afghanistan, health care and the military.

He said Democrats needed to step down, then also said he loved the president, Democrat Joe Biden. Facebook removed the videos a few hours after they were apparently filmed. Roseberry did not appear to have a specific demand for law enforcement other than to speak with Biden.

Roseberry’s ex–wife, Crystal Roseberry, said she had seen images of the man in the standoff at the Capitol and confirmed to The Associated Press that it was her ex–husband. She said had never known him to have explosives, but that he was an avid collector of firearms.

The nation’s capital has been tense since the Jan. 6 insurrection at the Capitol by supporters of then–President Donald Trump.

Fencing that had been installed around the Capitol grounds had been up for months but was taken down this summer. A day before thousands of pro–Trump rioters stormed the Capitol, pipe bombs were left at the headquarters of the Democratic National Committee and the Republican National Committee in Washington. No one has been arrested yet for placing the bombs.

The RNC, not far away from where the truck was parked Thursday, was also evacuated over the threat. Officials are also jittery over a planned rally in September in D.C.

The episode began about 9:15 a.m. when the truck drove up the sidewalk outside the library, police said. The driver told the responding officer that he had a bomb, and was holding what the officer believed to be a detonator. The truck had no license plates.

Hours into the standoff, the area remained blocked off by police cars and barricades, and multiple fire trucks and ambulances were staged nearby. Also responding were the District of Columbia’s Metropolitan Police, FBI and the Bureau of Alcohol, Tobacco, Firearms and Explosives.

The White House said it was monitoring the situation and was being briefed by law enforcement.

Facebook
Twitter
Pinterest
WhatsApp
Previous articleElite Island require Guest Over 12 to show proof of Vaccination for its 9 Resorts in the Caribbean and Panama as of 1st September 2021
Next articleTIME TO CHOOSE: Bahamian PM rings election bell for September 16, 2021