Tourism in Antigua and Barbuda Is Sending Covid Skyrocketing

Bloomberg – On a clear day in Antigua, Uriah Gregory, 43, pulls his taxi van over in front of a guest house painted in bright pink, purple, and orange hues and steps out to help a woman with her luggage. Pre-pandemic, Gregory estimates his taxi brought in $1,110 a month, shuttling visitors from resorts to restaurants and beaches during peak tourist season on the Caribbean island. Now, with few of those visitors in sight, he’s barely averaging $110.

Throughout 2020, Antigua and Barbuda’s population of 100,000 saw just 159 confirmed cases of Covid-19 and five related deaths, giving the islands of 365 beaches the appearance of a save haven.  Those numbers meant that only 1 out of every 629 residents ever developed the infection in 2020; during the peak of the second wave in July, it would have taken Miami just three days to achieve roughly the same levels of virality across its population of six million.

As a result, nearly 15,000 travelers flew or boated to Antigua and Barbuda in December, more than doubling numbers from the month before. (Antigua is a convenient haven for east coast Americans, many of whom can get there via direct flights.)  That began a wave of sustained tourism larger than any other throughout the pandemic. But as more visitors arrived, so did the cases of Covid-19. Confirmed positives multiplied nearly sevenfold in 2021, reaching 1,103 as of March 25. Deaths rose to 28. As a result, the U.S. Centers for Disease Control and Prevention increased its risk assessment for the country from Level 2 (moderate) to Level 4 (very high) at the beginning of March.

That’s forced Browne and his government to reckon with how closely connected international travel has been to the public health crisis—and to uncover that not all forms of travel are equally problematic.  Their findings could take on new urgency as travel professionals are recommending Caribbean trips to clients—newly vaccinated and otherwise—not just for the remainder of the spring season, but even into the typically low-season summer months.

A Tale of Two Policies

When foreign travelers arrive in Antigua and Barbuda, they’re allowed a certain level of “controlled flexibility.” All visitors must present a negative PCR test taken within seven days of arrival, wear masks, social distance, and obey a curfew currently set from 8 p.m. to 5 a.m.

Snorkeling with sting rays and exploring offshore islands is allowed, but only via certified, Covid-compliant vendors. Even hotels must be on a Covid-compliant list, like the luxury private island Jumby Bay or Carlisle Bay, where extensive public health protocol are followed to the letter.

Returning nationals—any citizen living abroad returning to Antigua and Barbuda—and other visitors not planning to stay at certified accommodations have it harder. They must quarantine for 14 days at a government-designated facility, such as the three-star Jolly Beach Resort, on their own dime.

For some locals, the double-standard is perceived as disproportionately affecting citizens, while allowing high-paying tourists to run free. And after videos and photos spread across social media in February showing people drinking, socializing, and dancing in close proximity at a resort on Valentine’s Day—allegedly including American celebrities—that debate kicked into fourth gear. (The links to the videos were quickly taken down, making them difficult to verify.)

On radio shows and across social media, locals have also voiced frustration that they get fined for breaking rules, but bad behaving tourists barely get a slap on the wrist; one Antiguan who broke curfew, for instance, was fined $500.  That growing resentment feeds the suspicion among some Antiguans and Barbudans that party-going Americans and other tourists may be to blame for their growing public health crisis.  Browne and members of his government disagree and point to returning nationals as the problem.

“Tourists are managed from the time they leave the plane to the time they [get back on the] plane,” says Minister of Tourism Charles Fernandez, adding that every person  a tourist comes in contact with—from taxi driver to tour operator—is trained in safety protocols. He says fewer than 10 people traveling solely as tourists have tested positive since the U.S. and U.K. mandated PCR testing before re-entry in January, and there’s no evidence of transmission in the hotel industry.

Both Fernandez and Browne say it was 1,500 expats who returned for the holidays—making up 7% of inbound arrivals throughout the festive season—that were flouting the rules when they briefly extended an opportunity for at-home quarantines. Compliance was so bad, the country at one point considered mandating ankle monitors. But it instead nixed at-home quarantine options in mid-January, sending Covid-19 cases back down. This evidence has “proven conclusively that the problem is not tourists,” says Browne, though complaints of foreigners’ behavior are still circling social media.

Antigua and Barbuda isn’t the only Caribbean island struggling to bring tourism back safely amid the pandemic. Barbados recorded 400 cases in all of 2020—only to see 3,071 positives in the past three months, following a year-end tourism spike.

Expats returning to Cuba, and the ensuing family reunions, were behind the country’s ballooning cases in early 2021, according to Cuban head of epidemiology Francisco Duran. (Cases in February 2021 accounted for roughly one-third of the 70,000 total Covid positives the country has recorded throughout the pandemic.) And in Jamaica, a seven-day average high of 176 daily cases in September 2020 has more than tripled into 618 daily cases as of March 23, triggering the government to tighten its window for mandatory PCR testing from 10 days pre-arrival to three.

Caribbean islands with the strictest travel protocols—or the smallest tourism footprints—are faring better. “Basically life seems normal in Anguilla,” says Haydn Hughes, tourism minister for the island of over 18,000, where only 21 cases have been reported since the pandemic’s start.

Locals there interact without masks or distancing, but all visitors must be pre-approved for travel thorough a registration process, get tested on arrival, and provide proof of a negative test between three to five days of their trip, after which they can only participate in certified activities like snorkeling and spelunking while following protocols. Returning nationals to Anguilla are constantly monitored during a 14-day quarantine.

Unlike Antigua and Barbuda, it has not relaxed how quarantine periods for returning nationals are handled. Barbuda, with a population of about 1,500 and only three hotels, has recorded only seven cases and no deaths, according to resident doctor Jeremy Deazle, who credits a strict and early adherence to Covid protocols.

But restricting tourism further in Antigua would lead to more economic loss, says Fernadez. Instead, the island has shut down bars, extended the curfew, and curtailed indoor dining. “Our Prime Minister is very realistic,” says Eli Fuller, owner of the boat tour company Adventure Antigua, who briefly considered shutting down operations again as cases rose in February. “If we don’t have tourism here, we’re going to starve,” he explains.

In Antigua, the cruise ship terminal, usually bustling with activity, has been empty since April, absent of the more than 600,000 cruise ship passengers who arrived  from March 2019 to February 2020. That may soon change, as major cruise lines begin plotting their return to the Caribbean starting in June. Only inoculated adults will be welcome on the ships.

But Antiguans and Barbudans themselves have no clear timeline as to when they, too, will join the double-jabbed masses. Herd immunity could be achieved across the Caribbean with just 300,000 to 400,000 doses, says Browne, but vaccines have been difficult for island nations to procure, with wealthy nations buying up the supply.

On March 1, Antigua and Barbuda began a vaccination campaign with 40,000 Oxford-AstraZeneca doses donated from India and Dominica that have so far been put into 25,961 arms. Another 14,400 doses are coming from the World Health Organization’s COVAX program, which was set up to address global inequities in vaccine availability. But that leaves nearly three-quarters of the local population waiting for another source.

Browne is advocating that the U.S. and U.K. ought to step up with donations, especially given the high volumes of returning nationals coming from those countries.

“What happened to the U.S.’ third border, the Caribbean?” Browne questions, after President Joe Biden announced plans in mid-March to loan millions of Oxford-AstraZeneca shots to Mexico and Canada. Lives and livelihoods are at risk, Browne says, predicting that the local population could spiral into poverty if tourism doesn’t fully rebound by summer.

Certainly the current situation isn’t sustainable. Fuller’s boat tour company is generating just 12% of the profits he normally would this time of year.

Taxi driver Gregory is confident that once residents are vaccinated, he country “can and will regain its status” as a premier destination for travel. But, he adds, until then, “with the lost income, you can’t buy food, you can’t pay your bills. The little savings you have, you watch it gradually depleting.”

AT-American rap artist and singer Akon has drawn criticism from rights activists over his meetings with Uganda’s president as he pursues the...
Read more
Headlines That Matter 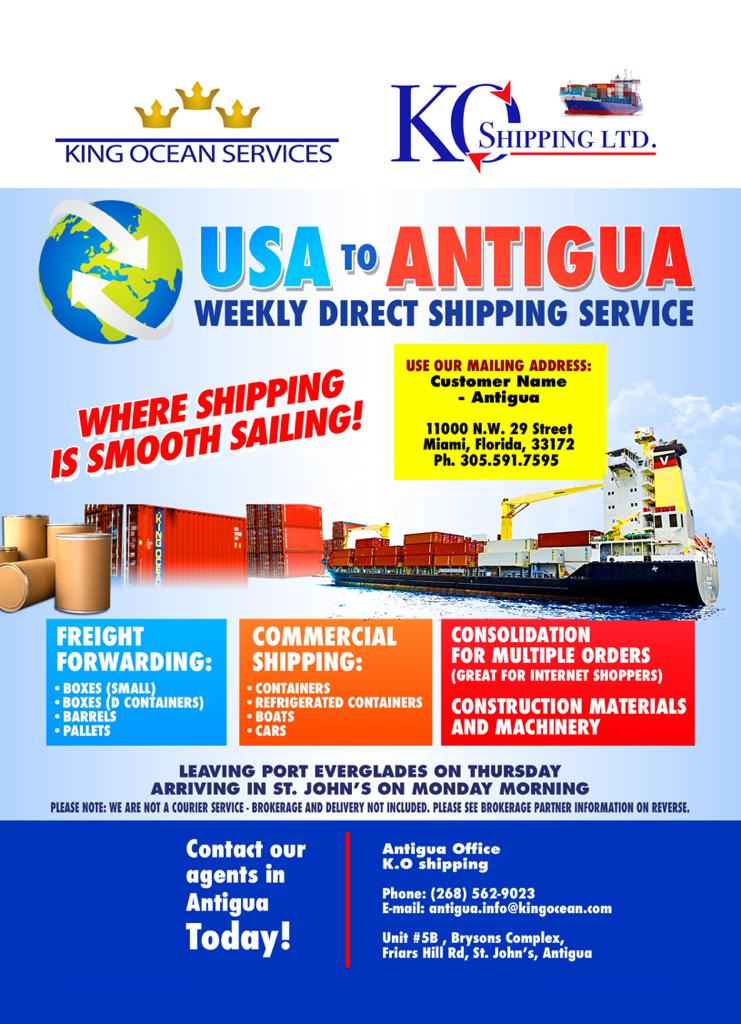 Observer Media-Four of the country’s young cricketers are set to travel to England later this month as part of an exchange programme...
Read more
Load more

Chester Hughes on Non-profit organization gives back
Szkło on Hurst condemns iron band procession
Parbriz Skoda Rapid Nh3 2016 on Non-profit organization gives back
Strike Force on Scores of Employees at Carlisles Bay Antigua laid-off for 3 week
Elizabeth T on PM accuses complaining pensioners of playing politics, and blames late payments on drop in private-sector deposits
joe biden we just did hat on Roger Stone: Critics blast Trump for commuting ex-adviser’s jail term
Stephanie on Out of the Box! The Story of Darah and Shadae
Anja on Out of the Box! The Story of Darah and Shadae
Richard Samuel on UPP’s Cleon Athill fears she is being discriminated against by Solid Waste Authority trash collectors
Richard Samuel jr on Collin James offer himself again to be ABLP candidate
Forward only! on I want to make it clear that I am not interested in a false display of camaraderie.
Strike Force on Millions Of Dollars Paid Out To Hotels Employees
hazel luke on CDB makes US$140M available to counter COVID-19 pandemic, other disasters
hazel luke on LIAT: PM Consults with Union and Workers