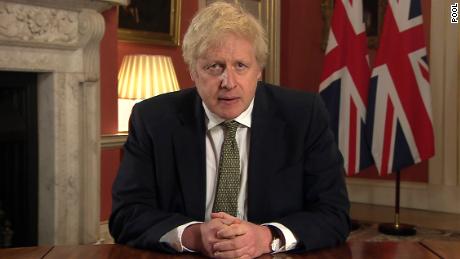 LONDON (Reuters) – British Prime Minister Boris Johnson on Monday ordered England into a new national lockdown to try to slow a surge in COVID-19 cases that threatens to overwhelm parts of the health system before a vaccine programme reaches a critical mass.

“As I speak to you tonight, our hospitals are under more pressure from COVID than any time since the start of the pandemic,” Johnson said in a televised address to the country as he ditched his regional approach to fighting the pandemic.

“With most of the country already under extreme measures, it’s clear that we need to do more together to bring this new variant under control.

“We must therefore go into a national lockdown, which is tough enough to contain this variant. That means the government is once again instructing you to stay at home.”

Johnson said the measures would include school closures from Tuesday and rules requiring most people to stay at home apart from essential shopping, exercise and other limited exceptions.

He said that if the timetable of the vaccination programme went as planned and the number of cases and deaths responded to the lockdown measures as expected, it should be possible to start moving out of lockdown by the middle of February. However, he urged caution about the timetable.

As Britain grapples with the world’s sixth highest death toll and cases hit a new high, the country’s chief medical officers said the spread of COVID-19 risked overwhelming parts of the health system within 21 days.

The surge in cases has been driven by the new variant of COVID-19, officials say, and while they acknowledge that the pandemic is spreading more quickly than expected, they say there is also light at the end of the tunnel – vaccinations.

Johnson’s government earlier touted a scientific “triumph” as Britain became the first country in the world to start vaccinating its population with Oxford University and AstraZeneca’s COVID-19 shot.