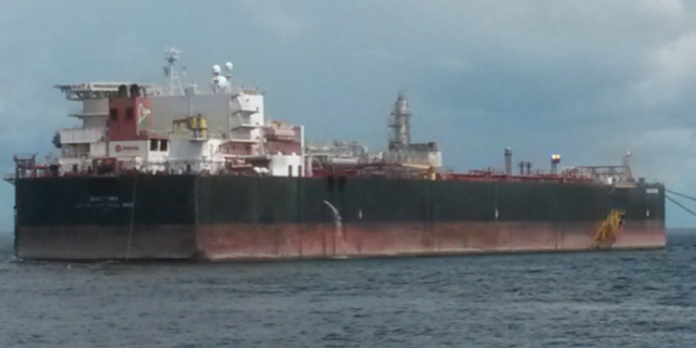 A huge oil tanker containing approximately 1.3 million barrels of crude oil has taken on water and is leaning to one side off a remote stretch of Venezuela’s coast in the Gulf of Paria. As Trinidad and Tobago authorities grapple with the political questions of how to respond to a crisis beyond the nation’s borders, questions have been raised about the potential environmental impact of an oil spill of this magnitude in the Gulf of Paria.

Cari-Bois Environmental News Network reached out to local non-profit organisation ‘SpeSeas’ and interviewed its team of scientists and environmental experts about the possible environmental impact if such a spill were to take place.

Given the position of the FSO Nabarima and our knowledge of the general circulation pattern in the Gulf, we would expect the Paria Peninsula to be the area most at risk. The ecosystems which line the Gulf of Paria include mangrove forests, coastal lagoons, estuaries, beaches/sandy shores, rocky shores and open ocean ecosystems and their associated biodiversity. Depending on the trajectory of the oil spill, all of these ecosystems are potentially at risk from an oil spill in the Gulf.

The Gulf of Paria, including the affected area, provides important migratory routes and habitat to megafauna such as whales, dolphins and turtles, birds and other marine fauna including commercially important species such as shrimp and fish species that will likely be impacted.

Because oil typically floats on the surface of the water, the animals most affected are those that are found at the sea surface or along shorelines, including fish and invertebrate larvae, as well as mammals and turtles that need to break the surface to breathe.

Typically, sea birds are impacted in the greatest numbers in most oil spills. Oil can smother organisms, coat the feathers of birds and skin of other animals. Skin and eye irritation can result from external exposure, while internal exposure can happen by ingestion or inhalation. Oil spills may also impair the marine organisms’ abilities to find food, avoid predators, breathe and reproduce. There may be a lower survival in offspring owing to the persistence of toxic chemicals in the food chain leading to organ damage.

If the oil comes into contact with land, it can affect coastal marine habitats and their residents such as mangrove forests, shallow water reefs and rocky habitats, beaches and mudflats, all of which are especially difficult to clean up.

Any fauna closely associated with these habitats will therefore also be negatively impacted.  In all cases, the extent of these impacts will depend on a number of factors including: the volume of oil spilled; the characteristics of the oil; wind strength and direction; water movement; circulation; and the clean-up response.

The Gulf of Paria is the most important fishing ground for shrimp and finfish in Trinidad and Tobago. More than 50 percent of all fishing activity in Trinidad and Tobago occurs in the Gulf of Paria. Marine fisheries are important both economically and socially for many rural coastal communities who depend either entirely or partially on fisheries for their livelihood.

Any oil spill within the Gulf of Paria has the potential to negatively impact on these fisheries. In addition to livelihood and sustenance, fisheries also contribute to food security, poverty alleviation, foreign exchange earnings, culture, recreation and tourism. The majority of marine fisheries resources exploited in Trinidad and Tobago are coastal with exploitation occurring by a large number of small-scale fishers.

Oil spills can potentially impact fishing communities in multiple ways. Some are direct such as oil on the surface of the water causing fishermen expense to clean their vessels and gear. This could cause some fishermen to refrain from fishing to protect their gear which could affect livelihoods through loss of income.

Furthermore, sales may be negatively impacted over a considerable period of time after any spill due to fears from consumers that the

fish are unsafe to eat. This has occurred in response to previous oil spills in the Gulf.

Fish kills are also a concern. This refers to the sudden and unexpected death of a number of fish or other aquatic animals in a specific area. If this were to take place, it would most likely occur in inland areas, where there is less circulation leading to fish getting trapped.

Many of these inland areas are also nursery areas for larval and juvenile stages that are less mobile. If the oil makes it to beaches, fauna on mangrove roots such as oysters and crabs would also be affected.

Trinidad and Tobago has an oil spill contingency plan (2013) that prioritises human health and the health of important marine ecosystems e.g. coral reefs and mangroves. There is also a Bilateral Oil Spill Contingency Plan between Trinidad and Tobago and Venezuela dated 1989 that will guide the response to any spill.

Spill response strategies for oil spills in open water generally may include booming, skimming, removal, storage, dispersants and in-situ burning. Methods of cleaning up any spilled oil must be carefully evaluated because the process of cleaning up can sometimes do further damage, especially along coastal habitats. Oiled wildlife can be sent for rehabilitation. Consideration can be given to replacing contaminated beach sand, replanting mangrove, marsh and seagrass beds.

Reports suggest the vessel is at risk of sinking and this can potentially result in the leaking of oil into the Gulf of Paria which can have devastating impacts. However, it is very difficult to speculate as to the likely extent of the impacts. Due diligence should be exercised to prevent the spillage of any amount of oil. There are considerable threats to take into account and the situation should be monitored closely.

The Bilateral Oil Spill Contingency Plan between Trinidad and Tobago and Venezuela should guide the response to any spill. We hope that the MEEI continues to stay abreast of this developing issue, prepares for any local spill response that may be needed, and keeps the public informed as things unfold.

SpeSeas a diverse group of Trinbagonian scientists, conservationists, and communicators who wish to make positive changes to the way the ocean is used and managed in our country, our region and our world. For this story, the team of experts at SpeSeas have chosen to pool their knowledge and resources to respond as a collective

The urgency of the matter for Trinidad and Tobago was first highlighted by Fishermen and Friends of the Sea (FFOS), through releases to the media and in a letter to the Minister of Energy and Energy Industries on August 24th.

In this initial letter, copied to the Institute of Marine Affairs and the Environmental Management Authority, FFOS urged the Minister to utilise the necessary channels to determine the validity of reports of the listing FSO Nabarima, and to determine, if necessary, any mitigation measures if such a spill were to occur.

FFOS subsequently wrote, on August 28th and September 5th, to the Embassies of the European Union and the United States of America to urge multi-lateral cooperation in dealing with the evolving situation. International media reports have since pointed to a lack of upkeep and maintenance as the primary reasons for the alleged disrepair of the 15-year old tanker. The alleged damage to the FSO (Floating Storage and Offloading Unit) Nabarima, sailing under the flag of Venezuela, was also brought to international attention by Eudis Girot, the head of the Unitary Federation of Petroleum Workers of Venezuela (FUTPV) through a series of tweets on August 30th.

However, Petróleos de Venezuela (PVDSA), the state-owned oil company that operates the Nabarima through a joint venture with Eni S.p.A, has categorically denied reports of disrepair, stating that the Nabarima has met all of its safety and operational guidelines and does not post any threat to the environment. In its September 5th press release, PVDSA also blamed the spate of international reports as a case of fake news targeted at damaging Venezuela’s national energy industry.

Locally, the Ministry of Energy and Energy Industries (MEEI) has stated that its initial reports from the Venezuelan authorities have indicated that the FSO Nabarima is at no risk of an oil spill. The MEEI went on to indicate that it is closely monitoring the situation and has “initiated official communication to get independent verification of the status of the vessel from the Venezuelan authorities.”

Corporate Secretary of Fishermen and Friends of the Sea (FFOS), Gary Aboud, put his life in danger by breaching Venezuelan waters to visit the damaged FSO Nabarima in the Gulf of Paria on August 16th, approximately three months after initially sounding the alarm. He described the oil tanker’s condition as frightening and expressed concern that adverse weather events could cause the vessel – which appears to be held in place by anchor chains – to capsize.

The United States (US) Embassy in Trinidad and Tobago put out a press release the same day of Aboud’s visit saying that the US strongly supports “immediate action” to avoid any environmental harm being caused by a potential spill from the FSO Nabarima. The US embassy further sought to reassure that “activities undertaken to avert an ecological disaster” would not be in contravention of any sanctions imposed against Venezuela.

The Ministry of Foreign and CARICOM Affairs also put out a press release the same day of Aboud’s visit to the FSO Nabarima stating that they have been actively working together with the Ministry of Energy and Energy Industries and the Ministry of National Security towards finding solutions to the issue.

The press release additionally states that The Venezuelan Government has agreed to permit a team of T&T experts to cross the border and assess the state of the vessel on a visit tentatively scheduled for October 20.

A change.org petition has been launched by concerned citizen Tyler Murray-Ramcharan calling on the Prime Minister of Trinidad and Tobago, Dr Keith Rowley, to address the issue and outline the steps to be taken to “prevent severe environmental damage with urgency”. The petition is seeking 15,000 signatures and had achieved just over two-thirds of its target by October 18th.