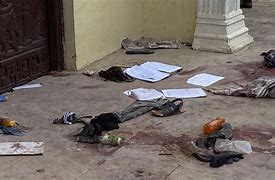 A church in southwestern Nigeria was the site of a bloody massacre after gunmen stormed inside St. Francis Catholic killing at least 28 people.

“The attackers came in motorcycles and started shooting sporadically,” Adeyemi Olayemi, the legislator representing the Owo constituency said. “They killed many people inside the church.”

State police could not immediately confirm the total number of casualties at Church, a police spokesperson said, nor could a motive be established.

“I am deeply saddened by the unprovoked attack and killing of innocent people of Owo, worshiping at the St. Francis Catholic Church, today,” said the governor for the area “the vile and satanic attack is a calculated assault on the peace-loving people of Owo Kingdom who have enjoyed relative peace over the years.”

He further promised to “commit every available resource to hunt down these assailants and make them pay.”

“We shall never bow to the machinations of heartless elements in our resolves to rid our state of criminals,” he continued, asking the public not to “take the laws into your hands.”