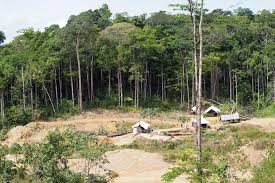 Caricom Today – Guyana and Suriname, Member States of the Caribbean Community (CARICOM), are among the few countries globally which still have significant natural forest cover having 60% and 91% coverage respectively. In Jamaica, 26% of the island is still covered by primary forest and there is currently ongoing controversy about protecting remaining natural areas, such as the Cockpit Country and the Dry Harbour Mountains, from mining activities.

An extreme case is in Haiti, where only about 0.3% of the natural forest remains. There is also discussion across the region on the use of limited prime agricultural lands for housing and other commercial activities. Thus sustainable development is a critical issue in these low-laying coastal countries and small island developing states which are moving to further advance development taking account of the effect of environmental degradation and climate change on fragile ecosystems and their need to build resilient economies.

The fragility of Small Island Developing States (SIDS) has also been highlighted by the economic impact of the COVID-19 pandemic over the last nine months. Among events held recently to focus attention on the COVID impact was the UN General Assembly (UNGA) Special Session on the Response to COVID-19 held December 3-4 and the UN Food and Agriculture Organization’s (FAO’s) dialogue on SIDS and food security held December 10.

These considerations and events reminded me that there is a specific international programme for addressing the sustainable development concerns of SIDS. I also recalled the UN Summit on Small Island Developing States (SIDS) held at the 74th UNGA in New York in September 2019.

This was the High Level Mid-term Review of the SIDS Accelerated Modalities of Action (SAMOA) Pathway. CARICOM Leaders attended this summit which focused global attention on SIDS. The SAMOA Pathway, in its priorities, reflect the UN Sustainable Development Goals (UN SDGs). Most readers may not be familiar with the acronyms, SIDS and AOSIS, and with the SAMOA Pathway. I am using this article to assist in building public awareness of both, the development of which had the active involvement of CARICOM Member States as SIDS.

The Alliance of Small Island Developing States (SIDS) or AOSIS, was recognized at the 1992 UN Conference on Environment and Development held in Rio de Janeiro, Brazil. SIDS/AOSIS, as a lobby group, operate within the UN system, including in the UN Conference on Trade and Development (UNCTAD) and the FAO, with the aim of highlighting their vulnerability to natural and man-made external shocks, food insecurity, and their need to build resilience.

The members of SIDS are mainly island nations and territories in the Caribbean and South China Seas, and the Atlantic, Pacific and Indian Oceans. It is also includes some low-laying coastal states. The CARICOM Member States are all members of the SIDS/AOSIS alliance. Note also that issues specific to small developing states had their genesis in the Commonwealth.

The third SIDS international conference was held in Apia, Samoa, in September 2014. The SAMOA Pathway was adopted at this conference. It sets out an action plan for 10 years to 2024. The priorities to be addressed through partnerships include sustained and sustainable, inclusive and equitable economic growth with decent work for all; sustainable tourism, energy and transportation; food security and nutrition; water and sanitation; climate change and disaster risk reduction; and sustainable production and consumption.

As stated, these are aligned with the UN SDGs. At the 71st UNGA in 2016, it was decided that a one-day summit would be convened in 2019 to review implementation of the SAMOA Pathway. In the lead up to the Summit, preparatory meetings were held at the national, regional and inter-regional levels. The Caribbean preparatory meeting and partnership dialogue was held in Belize in August 2018.